THERE IS apparently something about Matt Damon that mankind finds indispensable. 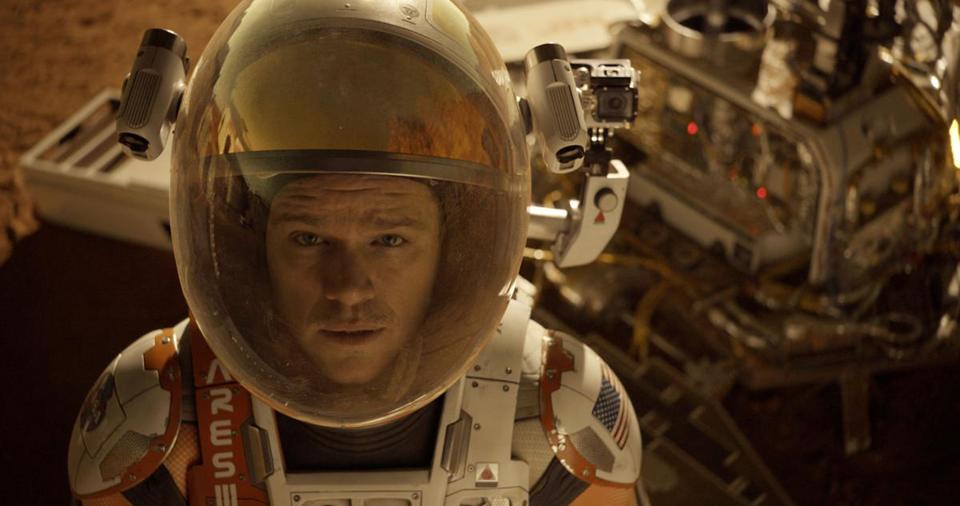 Now, in Ridley Scott’s “The Martian,” the entire world rallies to bring a stranded Damon back from Mars, where his presumed-dead character, Mark Watney, is left behind when other science-mission astronauts (Jessica Chastain, Michael Pena, Kate Mara) evacuate during a storm.

Watney’s funeral has come and gone when astonished NASA technicians see satellite images that reveal he’s still alive – in fact, busy as a bee building a life-saving biodome out of leftover space junk.
This inspiring spectacle of tenacity moves the world’s scientists to plan and execute a desperate rescue mission – Watney has only enough rations for two months, he needs to survive two solar years.
Which means that if the world is to save sole survivor Watney, stranded on a planet 140 million miles away, there is (impact of pun in five, four, three, two . . . ) no martian for error.

Whoa, what a terrible joke, but very much in the spirit of the film, which trades the dire desperation of “Gravity” or “Apollo 13” for a very agreeable wisecrack-y tone.

Watney has two kinds of armor against his precarious situation – his scientist’s problem-solving attitude (he’s a botanist) and his sense of humor. “The Martian” presents the latter as a life force necessary to existence, and is the better movie for it.

Of course, you have little choice but to laugh when you realize the only way to survive is to take your last potato and plant it in Martian soil fertilized with your last bowel movement.

This sequence is winningly typical of the way “The Martian” celebrates technological know-how – once Watney re-establishes communication with Earth (another ingenious sequence) he addresses the world’s braniacs: “We’re going to have to science the s— out of this.”

Back on Earth, an eager coalition of the world’s most nimble minds attack the problem – NASA folks (Jeff Daniels, Chiwetel Ejiofor, Sean Bean) and a plucky young scientist (Donald Glover) with a radical idea.

Caught in the middle, initially, as they make their slow return to Earth, are the astronauts who left Watney behind.

Is there a way they can help?

All is resolved in the exciting (3-D) deep space finale, which delivers action beats but still manages to make us laugh.

Strange that this funny, upbeat movie comes from director Ridley “Blade Runner” Scott, who made his bones with “Alien,” that great but tremendously downbeat space travel movie, one that grimly concluded the only thing mankind will discover in space are new versions of our innate greed and duplicity.

Now, at the tail end of his remarkable career, Scott returns with another grand, ambitious space adventure, but one that is contagiously optimistic.

“The Martian” is many things, but it’s certainly an ode to the idea of sustainability, and happily bereft of the hippie earnestness such themes typically elicit.

Because Watney is such a dude’s dude – repairing space capsules with jokes and duct tape and a plastic tarp – we almost don’t notice that he survives as a composting vegan who lives on organic produce, solar panels and EVs.

Scott’s point, I think, is not to show that man can survive on Mars, but that we can survive on Earth (note how Scott uses the movie’s signature visual – a sprout poking its head through the soil).

Watney represents a DIY generation who retains the can-do spirit their parents have abandoned to defeatism and silly, divisive factionalism (for them, there is last year’s cynical, screw-the-Earth epic “Interstellar”).

“The Martian” is a spirited antidote to that pessimism, an uptempo hymn to human ingenuity, with notes of wit and grit nicely embodied by Damon in his low-key performance.

Watney teaches by example, but he also delivers a speech in “The Martian” to the next generation of Watneys, who after all, are the ones who’ll have to make potatoes from the pile of poop we’ve left them.

When blackened tanks from a Hawthorne-made SpaceX Falcon 9 second-stage rocket accidentally rained down onto an Indonesian island last year, the nation got a palpable encounter with a problem known as “space junk.” Luckily, the rocket-propellant tanks that survived the white-hot burn of the Earth’s outer atmosphere didn’t hit any people or animals, even though one landed on a farm. But the … END_OF_DOCUMENT_TOKEN_TO_BE_REPLACED