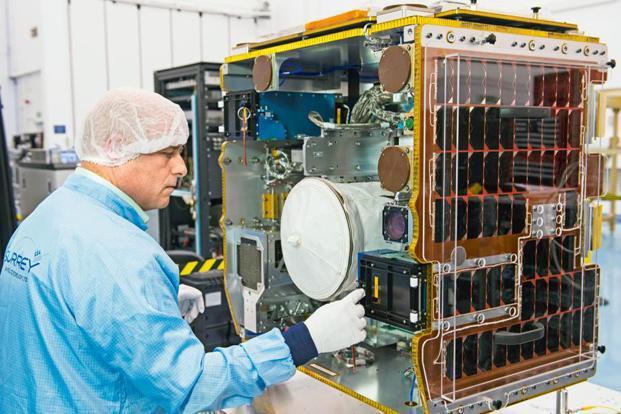 In the 2013 movie Gravity, two astronauts get stranded in outer space after their shuttle is destroyed by space debris created by a missile strike on a defunct satellite. What follows is an exhilarating story of how the two try to stay alive and return to Earth.

There is almost 7,000 tons of active space debris—from old satellites and spacecraft to lost components and spent rocket parts—orbiting Earth at any given moment. While some of the space junk in orbit decays with time, debris that is located at a higher orbit can take years to disintegrate. Take, for instance, the US Vanguard 1 satellite, launched in 1958—the oldest artificial satellite still circling Earth. Although contact with Vanguard 1 was lost in 1964, it is not expected to disintegrate before 2198.

Now, a low-cost research and development mission that will demonstrate different methods to remove active space debris is aiming to show the way in solving the problem. The RemoveDEBRIS mission, scheduled to be launched later this year, is being led by the Surrey Space Centre (SSC) at the University of Surrey, UK, and is co-funded by the European Commission and other partners, including prominent European space companies and institutions.

“The reason this is so important is because although we can simulate the space environment here on Earth and get an approximation of how moving objects behave, you can’t easily and accurately remove gravity and air at the same time on Earth, which both affect how objects naturally move in space. In order to properly understand the problem of finding, catching and dealing with space junk, we need a practice run in space,” says Simon Fellowes, the programme manager for the mission at the SSC.

As of now, the hardware for the spacecraft has been shipped to the Kennedy Space Centre in Florida, US, and is expected to be launched to the International Space Station (ISS) in a capsule on board a SpaceX rocket in March. On the ISS, the craft will be moved into an airlock and then carefully placed into orbit using the ISS robotic arm. “We expect to be operating the craft in June this year,” says Fellowes on email.

Once the main RemoveDEBRIS satellite platform is in orbit, it will showcase four methods of capturing artificial debris targets. The targets will be two CubeSats (miniaturized satellites provided by the SSC) that will be carried inside the main platform.

The first demonstration involves a net that will be deployed (net capture) at the target CubeSat. The second experiment will see the use of a harpoon, which will be launched at a target plate made of “representative satellite panel materials”. This will be a first-of-its-kind harpoon capture in orbit.

The third experiment using the other CubeSat involves vision-based navigation. Using cameras and LiDAR (light detection and ranging), the platform will send data about the debris back to the ground for processing.

The final experiment will see the RemoveDEBRIS spacecraft deploy a large dragsail to speed up its de-orbiting process. As it enters Earth’s atmosphere, the spacecraft will burn up, leaving no debris behind. “We don’t have much time to run the experiments in space because we intend to deploy the de-orbit sail around November. After the de-orbit sail is activated, we anticipate the RemoveDEBRIS craft will rapidly reduce height and finally burn up in the atmosphere,” adds Fellowes.

The mission, which started five years ago, aims to be a forerunner of missions to start removing some of the largest objects in space. Fellowes says that since this is a demonstration project, the cost (around €15 million or Rs117 crore) is low for a mission of this value.

Space debris problems and theories (like the Kessler Syndrome) about a cascade of collisions have reached such proportions that the ISS recently installed a “space debris monitor sensor” that will measure the size, speed, direction, time and energy of small debris affecting the sensor and the ISS.

Fellowes says the information gathered from this mission, and the experience, will be fed into follow-on missions to deal with targeted objects.

When blackened tanks from a Hawthorne-made SpaceX Falcon 9 second-stage rocket accidentally rained down onto an Indonesian island last year, the nation got a palpable encounter with a problem known as “space junk.” Luckily, the rocket-propellant tanks that survived the white-hot burn of the Earth’s outer atmosphere didn’t hit any people or animals, even though one landed on a farm. But the … END_OF_DOCUMENT_TOKEN_TO_BE_REPLACED