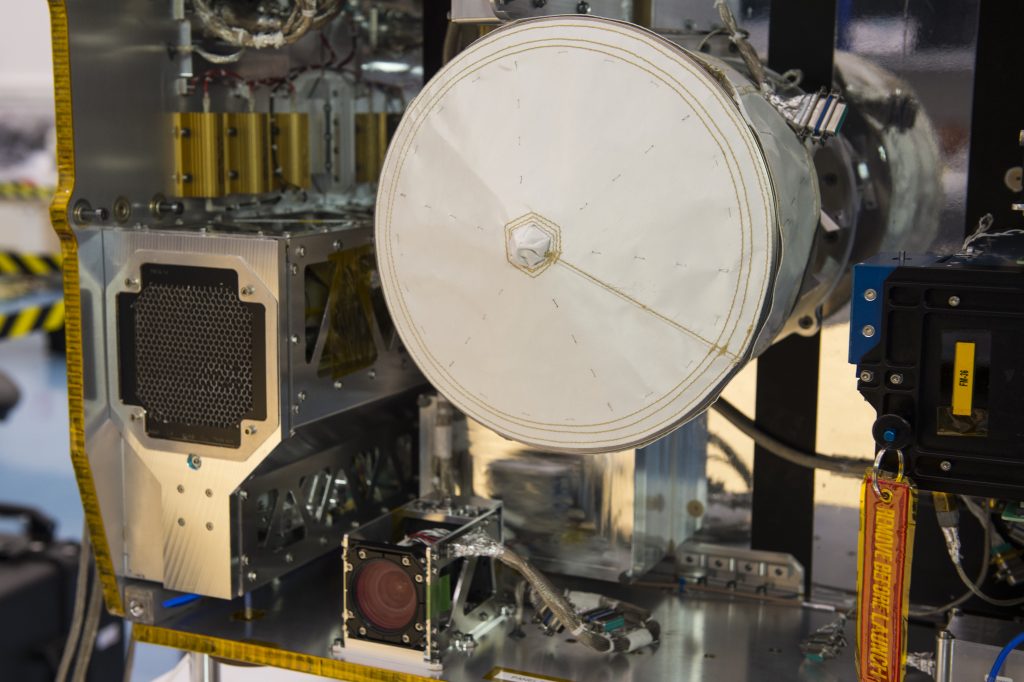 Surrey Satellite Technology (SSTL) has shipped the RemoveDEBRIS spacecraft to the Kennedy Space Center in Florida for launching it to the International Space Station (ISS) onboard the SpaceX CRS-14 re-supply mission.

RemoveDEBRIS is an Active Debris Removal (ADR) mission which is led by the Surrey Space Centre at the University of Surrey and co-funded by the European Commission and partners.

The RemoveDEBRIS satellite platform was designed and manufactured by SSTL in Guildford UK, and it will fly four space debris removal technologies and two target CubeSats. The platform, which is approximately one meter cubed, has a flight mass of less than 100kg and is due to be the largest satellite deployed from the ISS to date. It will be delivered in a box to the ISS where it will be unpacked by the astronauts and attached to a slide table for deployment using the Japanese Experiment Module Robotic Manipulator System, which has been developed by JAXA.

Once in orbit, the ADR experiments on board the spacecraft will be performed.  In the first of two capture experiments, a net will be discharged at one of the deployed target CubeSats to demonstrate net capture in space.  The second capture experiment will see a harpoon launched at a deployable target plate made of representative satellite panel materials – the first harpoon capture in orbit.  The third experiment involves vision-based navigation by deploying the second CubeSat and demonstrating rendezvous navigation using cameras and a LiDaR.  Finally, the RemoveDEBRIS spacecraft will deploy a large drag sail to speed de-orbit, where it will burn up as it enters Earth’s atmosphere.

Professor Sir Martin Sweeting, Executive Chairman of SSTL commented “Since the beginning of the space era, orbital debris has progressively been building up and there are now almost 7,000 tons of it around the Earth. It is now time for the international space community to begin to mitigate, limit and control space junk and I am very pleased that the RemoveDEBRIS consortium is leading the way with an innovative ADR mission which I hope will be a precursor to future operational ADR missions.”

“This is an excellent example of what can be achieved when Industry and Academia are working together to tackle real problems” said Prof G Aglietti, Director of the Surrey Space Centre, and current Principal Investigator for the project. The RemoveDEBRIS mission started in  2013 and is led by the Surrey Space Centre.

When blackened tanks from a Hawthorne-made SpaceX Falcon 9 second-stage rocket accidentally rained down onto an Indonesian island last year, the nation got a palpable encounter with a problem known as “space junk.” Luckily, the rocket-propellant tanks that survived the white-hot burn of the Earth’s outer atmosphere didn’t hit any people or animals, even though one landed on a farm. But the … END_OF_DOCUMENT_TOKEN_TO_BE_REPLACED