Various technologies are being developed by researchers worldwide who are concerned with UFOs in LEO: uncontrollable flying objects in Low-Earth Orbit. The growing volume of orbital space debris poses risks to the survival of satellites and to the safe journey of other spacecraft.

Tracking the exact position of cosmic junk is a crucial first step toward salvaging, recovery, or destruction of this hazardous waste. A fiber laser that reliably determines the position and direction of UFO movement has been developed by researchers at the Fraunhofer Institute for Applied Optics and Precision Engineering IOF in Jena, Germany. The laser system was designed to withstand high radiation levels, temperature fluctuations, and other harsh conditions in LEO. 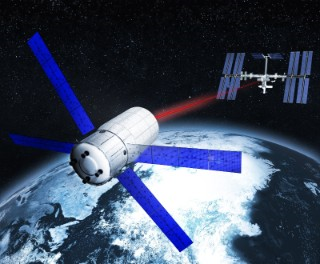 A short-pulse fiber laser was designed for the centimeter-accurate detection of space debris. (© Photo Fraunhofer IOF)The laser pulse is propagated through a glass fiber-based amplifier in order to analyze space debris over comparatively long distances; thousands of laser pulses per second can be emitted. If one of these pulses encounters an object, part of the radiation is reflected back to a scanner integrated into the system. This time-of-flight data can be converted into distances and 3D coordinates.

The principle – originally developed by researchers of Fraunhofer IOF for Jena-Optronik and the German Aerospace Centre (Deutsches Zentrum für Luft- und Raumfahrt, DLR) – has already been successfully tested during a space transporter’s docking maneuver at the International Space Station ISS. Previously, the laser system had been installed in a sensor of the Thuringian aerospace company Jena-Optronik GmbH and was launched in 2016 with the autonomous supply transporter ATV-5. Jena Optronik’s system also excels in energy efficiency: the fiber laser operates at a total power of less than 10 watts – that is significantly less than a commercial laptop.

When blackened tanks from a Hawthorne-made SpaceX Falcon 9 second-stage rocket accidentally rained down onto an Indonesian island last year, the nation got a palpable encounter with a problem known as “space junk.” Luckily, the rocket-propellant tanks that survived the white-hot burn of the Earth’s outer atmosphere didn’t hit any people or animals, even though one landed on a farm. But the … END_OF_DOCUMENT_TOKEN_TO_BE_REPLACED