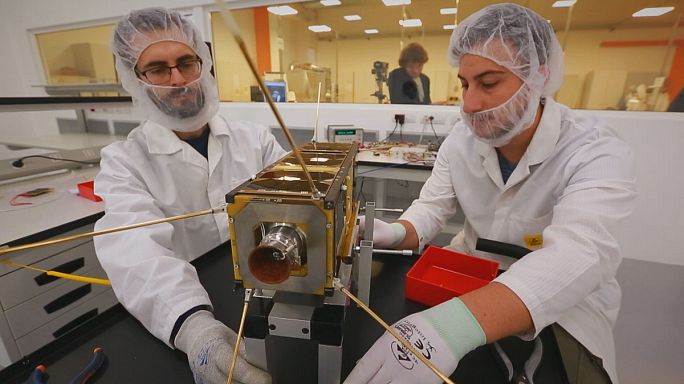 An estimated 18.000 objects in orbit are currently being monitored by radar stations. Only seven percent of these are operational satellites, the rest is space junk. And it’s expected to get worse with plans to send more than 10,000 additional satellites into space over the next decade.

This growing amount of space junk poses a real threat to operating satellites and space vehicles in general.

“There have been several explosions in space, both accidental and deliberate, there have even been collisions between satellites,” says Claudio Portelli of the Italian Space Agency. “The huge amount of spatial debris that is generated is a real problem for active satellites.”

D-Orbit is a company based on the shores of Lake Como in northern Italy, which turned to the EU’s Horizon 2020 program for funding. Its first major project was to find ways of decommissioning satellites safely once their life has come to an end. The system is installed before the satellite is launched and is used either to bring it safely back into the atmosphere or to send it to a so-called ‘satellite graveyard’ a few hundreds kilometres away from the operational orbit.

D-Orbit’s system also increases the satellites’ life-span as it isn’t necessary to spare fuel in order to decommission them. And the system can serve as an extra engine in case of emergency.

According to Lorenzo Ferrario, D-Orbit’s Chief Technology Officer, “the next big step is called In Orbit Now (ION) – a satellite transport system that we’re focusing most of our efforts on. It is built on the experience of D-Sat.”

Asked whether the new system will provide business opportunities, Claudio Portelli says: “There are a number of new solutions that can be found when it comes to reliability, cost-effectiveness and better integration to existing satellites, and once they have been tested in space, it will be even better.

When blackened tanks from a Hawthorne-made SpaceX Falcon 9 second-stage rocket accidentally rained down onto an Indonesian island last year, the nation got a palpable encounter with a problem known as “space junk.” Luckily, the rocket-propellant tanks that survived the white-hot burn of the Earth’s outer atmosphere didn’t hit any people or animals, even though one landed on a farm. But the … END_OF_DOCUMENT_TOKEN_TO_BE_REPLACED