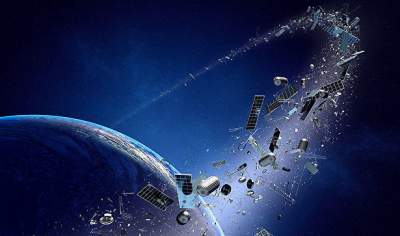 The garbage is not in place.

Today at the Earth’s orbit is about two thousand tons of active satellites and seven thousand tons of space debris, most of which have been “produced” US, according to the famous astronomer Jonathan McDowell.

“At the beginning of July in Earth orbit is approximately 7,200 tons of debris. About 3,200 tons left spins and the wreckage of American missiles and probes, 1700 belong to Russia and the Soviet Union, and 900 and 450 tonnes to Europe and China. All other countries produced about 950 tons of garbage,” writes a Harvard scholar in his microblog.

Current estimates of scientists, the Earth’s orbit is present in approximately 18 thousand man-made objects whose position is known to NASA and other leading space agencies of the world. Not yet open to debris at times more — their total number exceeds 170 million, and a collision even with one of them could spell disaster for most satellites, the ISS and manned space vehicles.

The existence of this problem, scientists have known since the end of the space race. In 1978, Donald Kessler, a NASA scientist, showed that a further accumulation of debris in orbit and increase its density to create the conditions in which the collision of two such particles will cause a kind of “chain reaction” that will lead to the destruction of all satellites operating at the height of the ISS above.

Since the collapse of the USSR, as noted by McDowell, the mass of space debris orbiting the Earth has more than doubled, up from a low of 3500 tons to 7200 tons. About 40% of it consists of a fragment of spent stages of rockets, and another 40% are fragments of broken or disconnected probes.

The remaining 20% are various objects of unclear origin. Their source may be fragments of a Chinese weather satellite FY-1C, which was destroyed in antimissile tests, “space weapons”, as well as fragments of the Russian communications satellite “Kosmos-2251” and the probe Iridium 33 collided in February 2009, and gave birth to thousands of small fragments.

All this rubbish, as shown by the observations of astronomer, do not stand still — he is gradually moving closer to the Earth and burn in its atmosphere. Just last year the planet has fallen more than 75 tons of garbage, most of which — 65 tons — fell on the waste stage of raketonositelej.

Despite this, the mass of debris in orbit continues to grow — over the last three years, it grew every year by about 100 tons, or about 2%. All this once again underlines the need for a speedy establishment of system of “cleaning” of the orbit of debris and protection of the ISS and current probes from colliding with him.

When blackened tanks from a Hawthorne-made SpaceX Falcon 9 second-stage rocket accidentally rained down onto an Indonesian island last year, the nation got a palpable encounter with a problem known as “space junk.” Luckily, the rocket-propellant tanks that survived the white-hot burn of the Earth’s outer atmosphere didn’t hit any people or animals, even though one landed on a farm. But the … END_OF_DOCUMENT_TOKEN_TO_BE_REPLACED